Posted on August 7, 2017 by Vitosh Posted in C Sharp Tricks

CodeForces.com is one of the reasons why I blog quite often. Last week, in round 427 there was an interesting problem, which I was eager to solve. The problem was described as follows:

The Cartesian coordinate system is set in the sky. There you can see n stars, the i-th has coordinates (xi, yi), a maximum brightness c, equal for all stars, and an initial brightness si (0 ≤ si ≤ c).

You want to look at the sky q times. In the i-th time you will look at the moment ti and you will see a rectangle with sides parallel to the coordinate axes, the lower left corner has coordinates (x1i, y1i) and the upper right — (x2i, y2i). For each view, you want to know the total brightness of the stars lying in the viewed rectangle.

A star lies in a rectangle if it lies on its border or lies strictly inside it.

For each view print the total brightness of the viewed stars.

I came up with quite a somehow easily. It was just collecting the data, analyzing it and checking for each star separately whether it was in the given view. It was running well for the initial tests, I immediately decided to give it a go:

100K stars and 100K views. It’s obvious that the solution should have been rebuilt. From scratch. And some algorithms should be actually used. Like an old school algorithm, or giving a difference between two sets of data, by writing the cumulative result on the new one. Something similar to this one here, about Karen and her Coffee.
The problem is one step more difficult – we do not have our data in a line, but in a Cartesian Coordinate System. Thus, if we always have the sum of the left and the upper (see the black square on the picture), the left and the upper would be containing each the yellow square. Thus, we would have the sums there twice. But, being able to realize this, makes it possible to solve the whole problem using it. 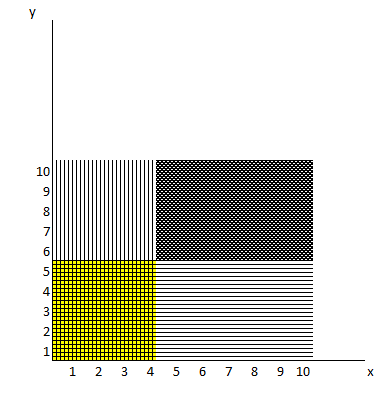 Although, it looks like the solution has the complexity of N^3, it is not exactly like it. 🙂 You may want to see, that we are reading the data after the 3 nested loops, thus its ok. And the maxXY is only 100, thus we are not looping a lot 🙂

The whole magic is in the following two lines, which I have tried to comment a bit more:

Thus, I hope that it becomes understandable.