Some two weeks ago, I was coding in Python with Notepad++ as a text editor and I was getting really tired, because the program was not running the way I wanted it and I had to print a lot of variables, to understand what I was getting. Then, suddenly, I tought of having an IDE (Integrated Development Environment) in Python, something like Visual Studio for C# and I found the Wing IDE. Thus, after few e-mails with their marketing department, I was provided with a the Wing IDE professional for a test. 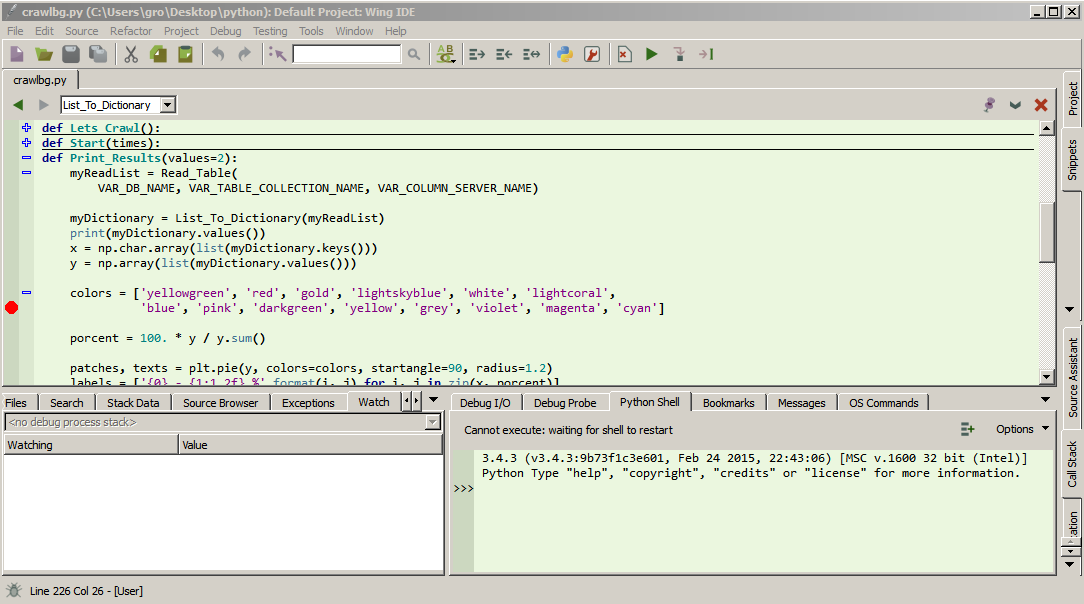 After some two weeks of coding with the IDE, I am ready to tell you my opinion about it – it is definitely better to use it than not to use it. Really! 🙂

Let’s start one by one, on what the Wing IDE is getting to you – (if you need all its features, go to their website, they are written all there, I will just mention what I found useful for my purposes) – you get to put stops and thus see the current values of the variables – that is really useful, if you are doing lots of interactions with lists and dictionaries and you want to make sure what is where in a certain time. Secondly, I liked the fact that you have great integration with Django! E.g., you may set a password for a superuser in a Django project from the IDE and other great stuff for Python + Django developers. The third feature I was interested in was the fact that Wing can emulate other editors, e.g. vim and Eclipse. Finally, for a person coming from the MS VBA world, the watch tool was really worthy, the conditional break points (something even better than debug.assert) and the possibility to point over a variable to see its value reminded me of something well forgotten, while I was coding in Python with Notepad ++.  The possibility to switch easily between virtual environments is also a plus for the Wing IDE. Last but not least, if you are not fan of Git, there is a built-in version control system in the tool.

There are many other positive features of Wing, but so far I was fascinated with these. 🙂

So far so good – the IDE is quite fast and it boosts up productivity! Thus, it definitely worths trying it at least for a month! Check the link to go to the web-site of WingWare.