Today I have finished the reading of Relational Database Programming, brought to me kindly by Apress.com 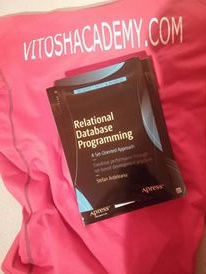 Thus the review is now here:

The author is a SQL developer. He was “laughed” for being a not a “real developer” from some developers, who were writing awful SQL code, thus this book appeared.

Thus, at the first 52 pages or so is his own revenge to developers who laugh at SQL developers and write bad SQL code. I really do not know why I have read those pages… Probably I did not have anything better to do, or I simply wanted to see how far it can go.

However, in these 52 pages we learn (except for the well covered hate towards developers) that there are in general two ways to write a query – the good and the bad way. The bad way of course is the developer’s way – building a cursors and looping through the rows (or something similar, depending on the situation). The good way is to use SQL and to think of the data as a whole set. The differences in performance seems to be enormous (and it is).

The second part of the book, after these 52 pages is quite ok. We get some samples of problems which are solved in two ways – the Holistic and the Atomic style. Even in four ways, because we get TSQL and Oracle SQL per Holistic and Atomic style. This is the better part of the book, which brings value. There we really see some relational database programming, with and without cursors, functions, procedures and triggers. And the good examples, together with the code online is what makes the book recommendable (with the condition that you skip the first few chapters).

The verdict – in general I am a positive person, and as far as there was a use I took from the book, I am giving it a positive result.