Python – How to write string into a matrix. Printing a matrix.

Writing string into a matrix seems like a non-interesting and somehow trivial task. Anyway, manipulating with matrices and strings in Python is actually somehow interesting, thus I have decided to present a small algorithmic challenge.  The task is pretty much like this:

I have decided to use a matrix for the creation of the place, where the “snake” was supposed to be. In Python, this is a beautiful 1-liner with list comprehension:

Once the  matrix is created, we may easily loop through its rows and columns. I am using r for row and c for column in the code. The “tricky” part in the algorithm is actually to find which letter from the “snake” to write at a given position. The “remainder” in python helps us to calculate it quite easily – matrix[r][c] = snake[current_position % snake_size]. Every second line is “reversed”, thus matrix[r].reverse() is exactly the method that we need.

At the end, we need to print the matrix, and I have decided to make a separate function for it:

The whole code works quite ok, displaying the matrix filled with the given string in the given dimensions: 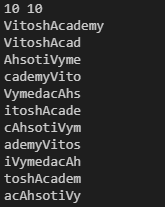