What exactly are early and late bindings? This is what MSDN tells us about it:

The Visual Basic compiler performs a process called binding when an object is assigned to an object variable.

An object is early bound when it is assigned to a variable declared to be of a specific object type. Early bound objects allow the compiler to allocate memory and perform other optimizations before an application executes.

By contrast, an object is late bound when it is assigned to a variable declared to be of type Object. Objects of this type can hold references to any object, but lack many of the advantages of early-bound objects.

So, after so much copy+paste, let’s give a couple of examples for early and late binding and finish the article 🙂 :

In order to make the Early binding possible, we had to add the Microsoft Word Object Library to the VBEditor (Extras>Libraries): 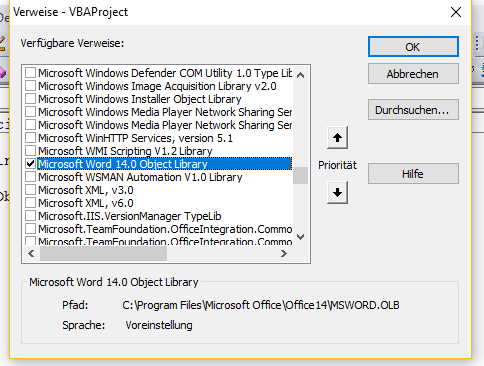 Then, we were able to use the intellisense of the word object:

Pretty much this is all. The difference is that in early binding you get intellisense and compiling time bonus. It saves adding a library by the developer (some 45 seconds).