Creating a visualization – Messi vs Ronaldo

They say practice makes perfect and in order to improve my data visualization skills I recently took up a weekly challenge. There are multiple ones depending on your interest and tool of choice, most of them advertised on Twitter. Whether you choose a short, weekly one, or a month-long challenge, they definitely get you motivated.

I decided myself for #MakeoverMonday, as the #datafam community on Twitter is large and supportive. A dataset is posted every Sunday in https://data.world/makeovermonday, asking two questions:

What works and what doesn’t work with the chart?
How can you make it better?

You analyze the dataset and create your visual during the next two days. By Wednesday the latest, you post it on Twitter, adding #MMVizReview and attend a webinar where the lead reviewers give feedback on some of the visualizations. Don’t forget to ask for feedback to the overall community on Twitter. The more eyes that see your work, the better.

My first submission was for week 15 in 2020, which presented stats for Lionel Messi vs Cristiano Ronaldo. The eternal comparison.

The original chart showed the goals per match in Spain’s La Liga during 8 seasons. However, the dataset contained more stats besides goals such as assists, appearances, minutes played, for both La Liga and the Champions League. 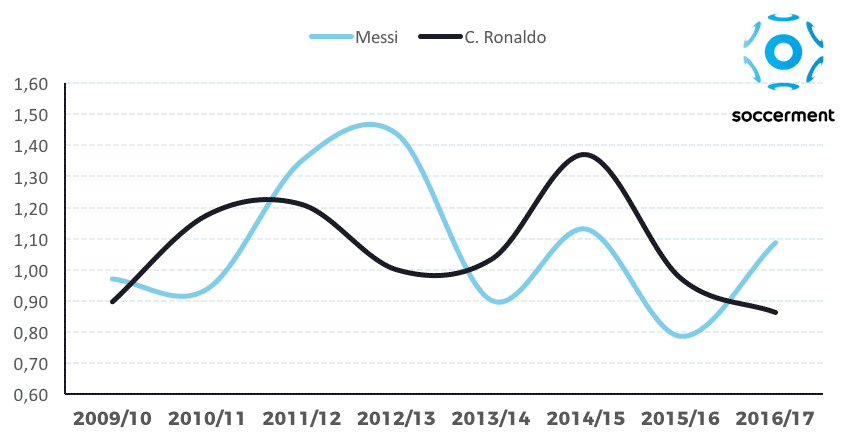 After pondering on the data for a while, I decided to provide a perspective on the players’ goal contribution (goals + assists). On the top left part of my dashboard I added a summary of all stats for each player, ordering them to ease the comparison. On the right, I allowed the viewer to choose between La Liga or Champions League and added an explanation of what I wanted to achieve with the visualization.

On the bottom part, I went for a horizontal stacked bar chart. For every season, there are two bars placed side by side to represent Messi (in blue) and Ronaldo (in yellow). The bottom/darker piece of the bar represents the goals. The upper/lighter piece are the assists. The total sum is the goal contribution, represented by a dot.

Even if my viz was not selected for review on Wednesday, feedback was given on a similar one. I took the cue and improved mine based on the comments. I made the bars vertical and spaced them. I also added a light grey background alternating between the seasons, to distinguish them easier. Lastly, I rearranged the explanation text. The result was a less cluttered dashboard, more legible than the original one.

By participating consistently, you will create your own portfolio. As I use Tableau, the profile on Tableau Public is a good place to showcase your work (My Tableau profile is here). Moreover, you will notice your progress as you review your own visualizations.

Some people find it tedious to query a database in command line interface. I get a kick out of that. Slicing databases to obtain my own data as a Functional Test Lead got me curious in analytics. Fast forward some years and I'm an enthusiast for all things data: finding insights, creating visualizations and making the complex understandable for the business. I'm still hands on cleaning all kinds of files with Python and digging in databases with good old SQL. Wanna talk? Let's connect at Twitter or at LinkedIn!