Building web sites is for at least 20 years a thing. Even I am able to build one, using WordPress without some advanced IT skills. Lately, I was into jQuery and thus I found something really meaningful and well written there – the library jQuery Mobile. With its help it is quite easy to build a nice web site, which looks like an application. Thus, some hours ago I have started doing it and now I am blogging about it 🙂 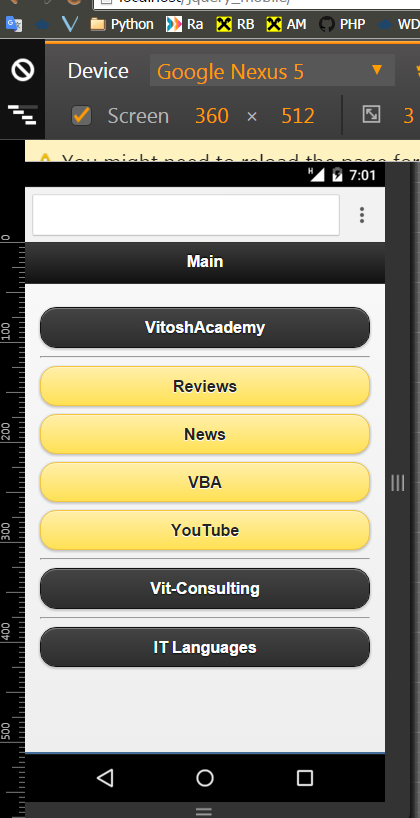 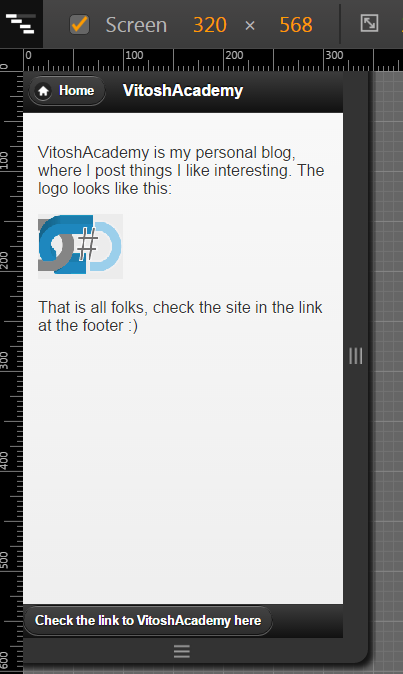 So, how the site looks like? The simple answer is – really mobile 🙂 Although my WordPress theme is responsive, building something on jQuery mobile is really another level of responsiveness.

Thus, I have started with building 4 pages for the site – one main, one called Vitoshacademy, one Vit-Consulting and one IT-languages. The backbone of the “project” (it is less than 100 lines, that is why I put it in parenthesis) comes from the jQuery mobile, giving the following page anatomy:

I have also used some ideas from the boilerplates there. 🙂

The result was nice for me, because I have managed to achieve it quite quickly and without really much efforts. Although, the HTML code is really repetitive at some times (e.g. the footers and the headers really must not be written this way, its 2016 and code repetitiveness is a sin), I still consider it something 🙂 🙂

Thus, I have created a separate repository for the site in GitHub here. Not a lot, just an index and two pictures, but the idea was to see what can be done with jQuery Mobile. And indeed the result is impressive. 🙂 Really less writing and much to see 🙂

The quickly built site is available here -> vitoshacademy.com/jquerymobile and it really looks better on a mobile device 🙂

That is all, folks! Once again, enjoy it!